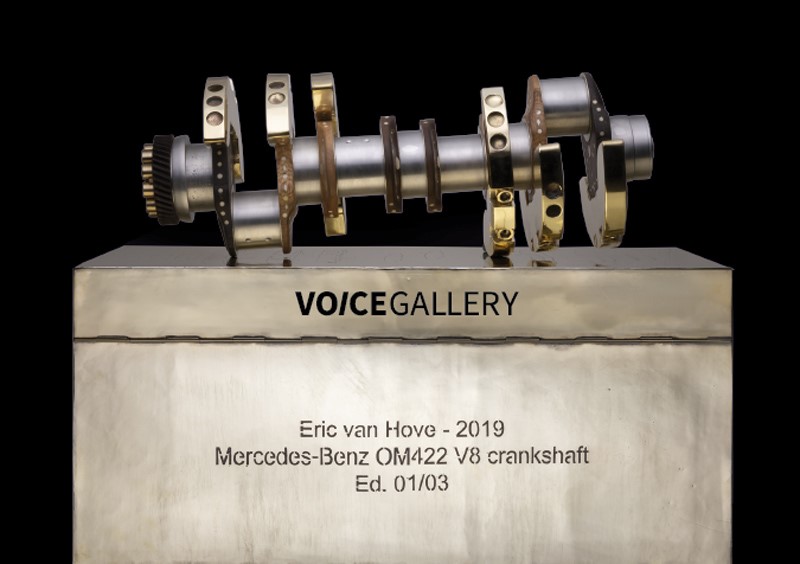 Eric van Hove settled in Marrakech 2012, with the initial idea for the creation of his work V12 Laraki: a hybrid sculpture rooted in various sociocultural contexts, through which the artist, in a post-Fordist manner, explores the practical and the metaphorical boundaries between craftsmanship and capitalist production. He realises, with the collaboration of nearly fifty craftsmen, the replica of the Mercedes V12 engine from the Laraki Fulgura, highlighting the great diversity and richness of Moroccan craftsmanship. This art work and meeting Maâlem Abdelkhader Hmidouche constitute the starting point for the creation of his studio in 2014: Fenduq; an hybrid platform, conceived to re-invent the traditional boundary between the funduq, derived from tradition and the contemporary artist’s studio; within which, since then, a dozen of craftsmen have been employed.

This third solo show of Eric van Hove’s work opens at the VOICE gallery upon a diptych the artist undertook in the Ixelles cemetery in 2009. After having produced identical “shrouds” on other artists’ tombs, such as Mondrian’s or Basquiat’s, Eric van Hove used graphite on linen to transfer the double- sided tomb of Marcel Broodthaers. Inspired by the shroud of Turin (the sacred shroud), and using the forgotten graves of otherwise well-known artists, the work becomes a kind of ex voto, a substitute for the original tomb.

Next to this “memento” piece, are the spare parts of a combine harvester (crankshaft, alternator, oil filter…) dismantled from Us Heit (Claas Jaguar OM422 V8), the latest main piece to have come out of the artist’s studio and part of a retrospective at the Fries Museum in Leeuwarden in 2019, also subject of a recent documentary released by Dutch television Omrop Fryslân ( Hert & Siel- 95 mins). Also shown is a new body of work directly linked to the singular relationship the artist maintains with the scrapyard in Marrakech.
The so-called breakers’ yard in Sidi Ghanem, true industrial ossuary of the city, is in fact the quickly changing nerve centre of the local circular informal economy, pre-modern functioning of the craftsmen’s studios of the Medina. From what the artist describes as an “archive of industrialism” and a “memorial site of modern peripheries” the artist draws out a group of works inspired by the hanging devices used in what one might call the anti-medina.

Eric van Hove also presents a new piece made for this exhibition called “Two-faced rehabilitation”, establishing once again his rooted interest for collective memory and showing his economic and social involvement:
“The collective taxis (called ‘Grands Taxis’) have accompanied the Moroccan people in all the important moments of their lives since the Green Walk. These W123 Mercedes cars were named ‘Fraternity Taxis’ after the inevitable promiscuity induced with other passengers when seven people were crammed in one car, shoulder to shoulder, four at the back and two at the front next to the driver.
Though, from 2014 onwards, the Interior Ministry in Morocco decided to renew the flotilla of Mercedes taxis, offering the drivers grants to move to the Dacia Lodgy of Moroccan make: a car produced in the newly built Renault factory in Tangiers, fruit of the “planned obsolescence” of an economical ideal. The objective, I suppose, conforms to a wish to quickly formalise all aspects of national economy.
Therefore, in 2017, the roads were full of trucks taking the old ladies to a factory near Agadir, where, -according to what a truck driver said to me- they have been dissolved in acid to make sure this immortal piece of machinery wouldn’t come back.
Considering the amount of collective memory accumulated in these cars throughout the modern period and the radical way in which they have been eliminated, I felt this particular event deserved a monument. In remembrance of the besieged informal economy of Morocco and what remains of an era where the industry and craftsmanship shared an equal presence in the public space, where resilience was incarnated in consumer goods, which, modest, were honourable.”

Eric van hove has recently had a number of solo shows, namely a recent year long retrospective, Fenduq, at the FRIES MUSEUM, Holland, presented at the VANDANLORUM MUSEUM, Värnamo, Sweden, from February the 1st; Atchilitala- On The Transformation of Art, Craft and Product, at the FRANKFURTER KUNSTVEREIN, Frankfort, Germany, 2016, the exhibition then travelled to the Mu.ZEE, Ostend, Belgium, 2017.
His work has also been included in group shows, such as The Art of Craft at the HOOD MUSEUM OF ART, Hanover, New Hampshire, USA, 2019; 2050 – A Brief History of The Future at the MUSÉE ROYAL DES BEAUX-ARTS, Brussels, Belgium, 2018; Beazley Designs of The Year at the LONDON DESIGN MUSEUM, London, UK, 2017; Sharjah Biennale 13, Beyrouth, Lebanon, 2017; Not New Now : Marrakech Biennale 6, Marrakech, Morocco, 2016.