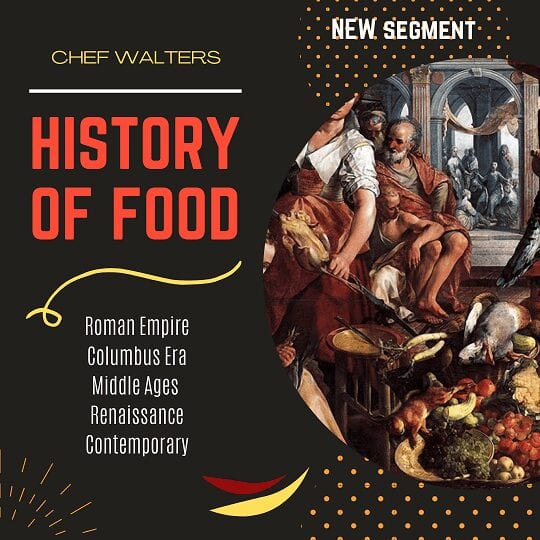 As part of our new food and history feature, a brief read about Rome’s most recognized representative and it’s table’s etiquette.

Julius Caesar was a Roman general and politician, born of a noble family belonging to the gens Giulia. History tells us that he was one of the most controversial but legendary leaders of the ancient world. To his credit, he laid the foundations of the future Roman Imperial political system at the end of the republic.

(1) Suetonius thus tells of Caesar in the book “The Twelve Caesars.”

“It is said that he was tall, well proportioned, and pale in color. His face was too full, and his eyes were black and lively. He was in excellent health, but lately, he suffered from fainting and nightmares: twice, while doing his activity, he was also seized by epileptic attacks “.

(1) The Twelve Caesars is probably the most in-depth book ever written about the personal lives of the twelve caesars. Suetonius goes to great lengths to reveal the way these men really were, as human beings. Each emperor is dissected, and his actions beyond politics and professionalism revealed. (Trusted Source)

Cesare Caio Giulio seems to have used temperance in food consumption. During his time in Rome, his council built the first market of gastronomic specialties, a sort of outdoor 4 -tier market with an elaborate irrigation system of purified water. The Roman nobles, lovers of the pleasurable life, attributed the table’s pleasure to one of the highest values and believed that their tastes were the only ones to be considered “civil.” The social class’s distinction was evident in the dining habits of the elite.

Caesar never ate pizza as we know it today, but some flatbread type made with a mixture of spelled flour and water, cooked over coal, and infused with a sauce called “liquamen.” The salty fish-based sauce that probably tasted much like pureed anchovies was a favorite for Romans of every social status, and bottles of it were as likely to be found on Caesar’s table for a state banquet as on the kitchen table in the home of a farmer or merchant.

For accuracy purposes, the Emperor never had a Cesar salad. That concoction came about the turn of the 20th Century in Tijuana, Mexico by Chef Cesar Cardini.

Greek biographer Plutarch reported about Caesar while he was governor of the Cisalpina region from 59 to 55 BC in a particular episode. One evening Caesar went with his closest collaborators to the Milanese Domus of the rich and influential Valerio Leone. Among the courses was served a magnificent preparation of fresh asparagus seasoned with creamy butter. The general did not like the dish (accustomed to olive oil and not butter, used in Rome as a body ointment). The guests indicated that butter was “barbaric” food not suitable for their refined palate. Faced with the embarrassing situation, Caesar, as an intelligent and circumspect man, calmed souls with the solemn phrase:

In short, he had made it clear to his officers that one does not object when someone hosts one. The next time you get invited for dinner, keep your taste preferences to yourself. Be grateful you were invited, and follow Caesar’s advice.

The repudiation of butter summarizes the limited use of animal fat in today’s Italian cuisine. In retrospect, French cooking’s primary fat of choice relies on butter. France was under Roman dominion for several decades, and I always wondered what happened. It is history’s complexity, especially with food.