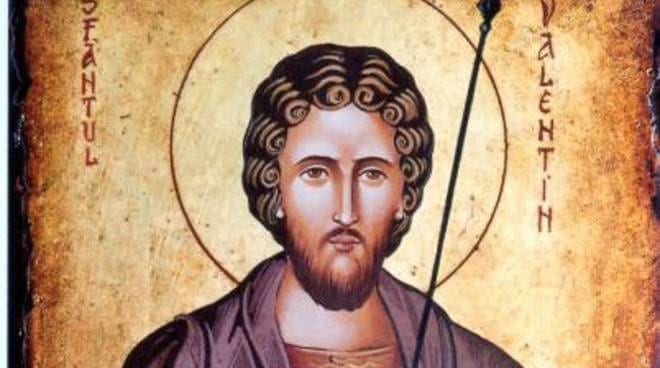 I don’t know why we give out chocolates on Valentine’s or the connection between the 14 of February and cocoa beans. At first, I thought that maybe chocolate was discovered on that date and remained embedded in the minds of those in love, but after some research, I realized that the two have nothing in common, but maybe a little history could make it entertaining. Saint Valentine was born around 176 BC, chosen as archbishop at the age of 26 for the city of Terni in Umbria. He was continuously persecuted by the Roman emperor Aureliano because of his strong faith and disciplined belief and eventually murdered in the year 273. The Saint’s remains rest in a silver statue inside his basilica located at the outskirt of the city of Terni. Pn the bottom of the glass chest, a logo reads: “San Valentino patron of love.” Many legends surround the saga of the Saint. One of them cites a quarrel between two young lovers walking by the Saint’s garden. After a moment of pause, he offered a rose to the couple, suggesting them to squeeze the stem and puncture their fingers. At the sight of blood, the Saint smiled and calmly said: “cor Unum”…..united at heart through the blood. The couple eventually came back months later and asked the Saint to marry them, which he did. The date of the matrimony, the 14 of February, remained forever the celebration of Valentine. Many more different legends surround the aura of San Valentino and, through time, have evolved into much more than merely an exchange of cards and presents, but a search for a substantial commitment of sublime love.

But how chocolate got into Valentine’s is still a mystery. We know that the cocoa tree’s scientific name is “theobroma cacao,” which translates in Greek as “foods of the Gods.” The name was chosen by Carlo Linneo, an Italian aristocrat, in 1735. However, it is challenging to identify with certainty the actual arrival of the bean in Europe. Many historians claim that Cortes, the bloody Spanish conquistador, discovered it first, but the evidence is not fully transparent to validate the claim. The actual first recorded passage from the New World city of Veracruz in Mexico to Seville in Spain was in the summer of 1585 when a large shipment of cocoa bean arrived in that Iberian city. In the high courts of Spain, the new presence of chocolate in Europe immediately popularized.

The Spaniards, accustomed to marzipan and nougat’s sweet flavors, began combining the refined cocoa powder into a honey and vanilla beverage. Around the year 1615, Queen Anna of Austria tasted chocolate for the first time on a trip to Spain and introduced it to french aristocrats. The Queen supposedly enjoyed melting the chocolate in milk from which its name derives “chocolate.” In Venice at the beginning of the 700, the first coffee shops were, in fact, chocolate shops, where patrons indulged in rituals tasting while inventing other unusual recipes. Nevertheless, the newfound pleasure never really became popular among the masses until later on. The initial response was of a beverage that resembled a starchy concoction with oily back flavors that the additional added ingredients to masquerade its taste could not wipe out. However, in 1828 the Dutch scientist Conrad von Houten obtained the patent that allowed the separation of the seeds’ two primary components: cocoa powder and cocoa butter. The vague chocolate served in elaborate cups in elegant cafes turned into today’s luscious craving due to the revolutionary method’s introduction.

For a very long time, after it arrived in Europe from the Americas, cocoa was an aliment for the rich and the famous members of the bourgeois elite. It was used primarily as a beverage or as a main ingredient in sweets and many savory dishes such as roasts, pasta, and polenta. After many years of indulgence in drink, chocolate became even more popular once the liquid converted into a solid form. The usage of cocoa in savory cooking dishes diminished considerably. The stable version became much more appreciated, especially in bar forms, and enjoyed throughout the day. In the capital city of Piedmont, Turin introduced the first machinery for cocoa’s refinement.

After the Napoleon invasion, the cocoa supply became more costly and challenging. Still, the Torinese chocolatiers substituted part of the cocoa with the famed hazelnuts from Piemonte’s Langhe area creating “Gianduiotto,” the chocolate hazelnut concoction shaped like a gold bar and recognized all over the world. Following the enormous success in Torino, the British jumped on the innovative idea and created the first Fry & Sons chocolate bar, made with a mixture of cocoa butter, sugar, chocolate, and liqueur. Fine chocolate was introduced in fine café’ and bars in the Orient in cities such as Istanbul, appropriately called “cafeteria,” followed by Oxford and Venice.

For centuries it was believed to be a potent aphrodisiac, mainly because of a stimulant called feniltelamine, present in cocoa. Several authors and philosophers carried the unusual habit of consuming chocolates before meeting their dates or offering them as presents along with flowers. We may have been merely moving the lovable tradition through times. We may never really know of the connection between chocolate and Saint Valentine, and it does not matter, provided that we continue the same lovable habitué’. Happy Valentine to all!