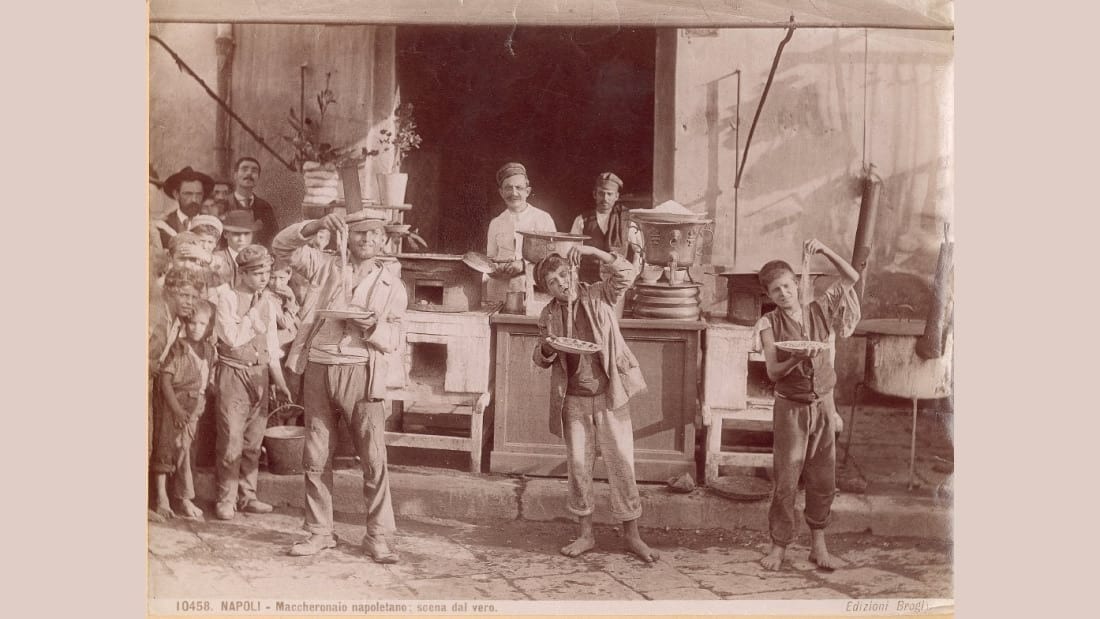 When Italian futurists tried to ban Pasta in Italy. The outrageous crusade against the country’s most beloved carbohydrate.
Flavors and Knowledge

While speaking at a multi-course banquet in Milan on November 15, 1930, Filippo Tommaso Marinetti presented his fellow Italians with an incendiary call to action. Pasta, he said, was a “passéist food” that “[deluded people] into thinking it [was] nutritious” and made them “heavy, brutish,” “skeptical, slow, [and] pessimistic.” As such, pasta should be abolished and replaced with rice.

So began a fascinating moment in food history: an outrageous crusade against the country’s most beloved carbohydrate. Not only did Marinetti’s movement elicit passionate reactions on both sides, but it also had some less-than-tenuous ties to Benito Mussolini’s fascist regime. 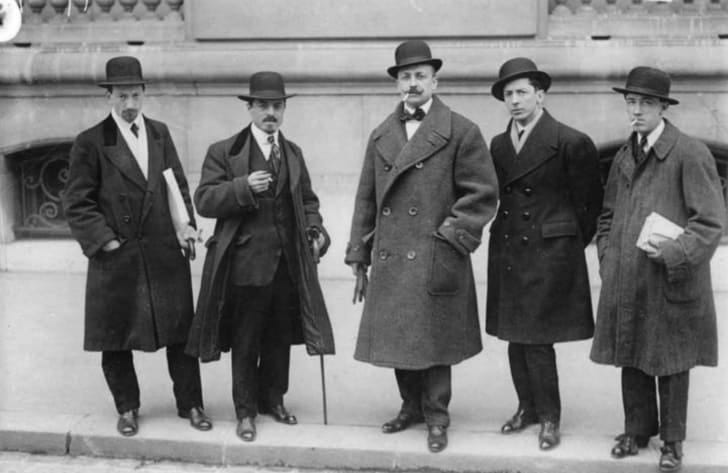 Marinetti’s initial statement spread so widely because he loomed large over society at the time. His 1909 “Manifesto of Futurism” launched the Futurist movement, which championed a shift away from the slow, outmoded processes of the past and toward the future’s smart technologies. Though originally specific to art, Futurism was a nationalist cause at heart—a way for the newly unified country to catch up to other world powers—and it aligned with Mussolini’s fledgling political campaign. The two men closely collaborated while establishing their respective political parties (Marinetti’s Fasci Politici Futuristi and Mussolini’s Fasci di Combattimento) as World War I came to a close. Marinetti had distanced himself from Mussolini by the early 1920s, but he still invoked Il Duce’s policies when they served his goals.

For the pasta prohibition, they did. To make Italy less reliant on imported wheat, Mussolini’s administration had started promoting rice—which was much easier to produce domestically—over pasta. In the late 1920s, he established the “National Rice Board” and even declared November 1 to be “National Rice Day.” As Philip McCourt writes for the Journal of Art History, the dictator never went so far as to ban macaroni. Still, citizens were already familiar with anti-pasta sentiment by the time Marinetti began his smear campaign.

On December 28, 1930, the Futurist followed up his dinner speech with the “Manifesto of Futurist Cooking,” co-written with the artist Luigi Colombo (known as “Fillìa”) and published in Turin’s Gazzetta del Popolo. In it, they described pasta itself as an “absurd Italian gastronomic religion” and pasta lovers as being “shackled by its ball and chain-like convicted lifers or [carrying] its ruins in their stomachs like archaeologists.”

In short, they believed that pasta weighed Italians down and prevented them from achieving any greatness. The ultimate solution was for the government to replace all food with nutritional pills, powders, and other artificial substitutes. Still, until the chemists could create such innovations, the Futurists would settle for swapping out the pasta with rice. “And remember too,” they wrote, “that the abolition of pasta will free Italy from expensive foreign wheat and promote the Italian rice industry.”

While Marinetti’s initial speech had incited a small uprising among Italians, his written manifesto gave the issue a global audience. “Fascist Writer, All Wound Up in Health Subject, Begs Countrymen to Swallow New Theory,” the Chicago Tribune summarized in an article titled “Italy May Down Spaghetti,” which hit newsstands just two days after Marinetti’s manifesto.

Smaller presses covered the bombshell, too. “No, signor. We implore you, call off your holy war,” Ernest L. Meyer pontificated in Madison, Wisconsin’s The Capital Times. “Would you abolish macaroni and all its tunefully christened cousins—macaroncelli, foratini, maglietti, ditalini, vermicelli—and reduce Italians to the ugly dissonances of beans, cabbage, chops, chard, and chewing gum? Fie, signor, there is no poetry in your soul, and your palate lacks wit.” 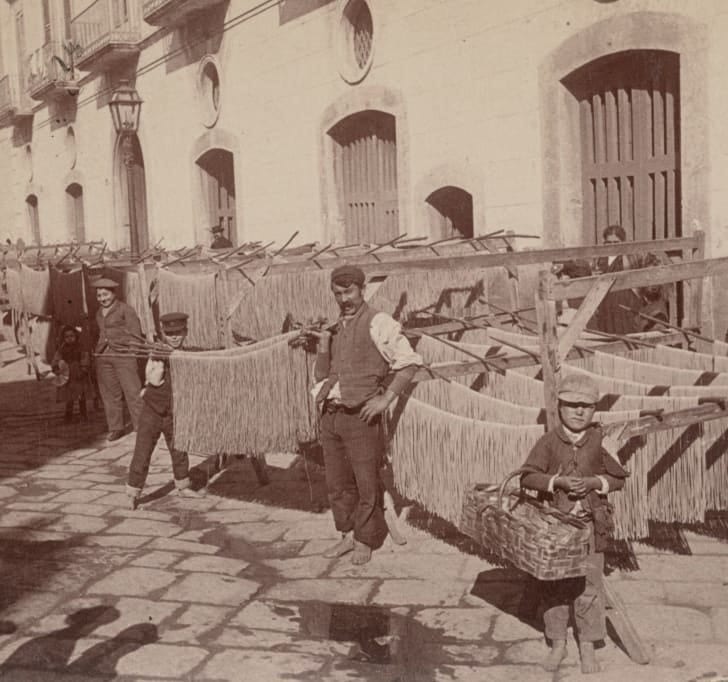 Pasta drying in the streets of Naples in 1897.J.F. Jarvis, Library of Congress Prints and Photographs Division // No Known Restrictions on Publication

People living everywhere from France to Australia commented on the matter, but nowhere was the response more impassioned than Italy. Women in the city of L’Aquila sent Marinetti a protest letter, and the mayor of Naples went so far as to proclaim that “the Angels in Paradise eat nothing but vermicelli with tomato sauce.” (Marinetti later retorted that this was simply proof of “the unappetizing monotony of Paradise and the life of the Angels.”) But Futurism wasn’t unpopular, and the pasta ban had ardent advocates of its own. Italian writer Marco Ramperti, for example, criticized the beloved repast in a highly imaginative op-ed.

“[Pasta] puffs out our cheeks like grotesque masks on a fountain, it stuffs our gullets as if we were Christmas turkeys, it ties up our insides with its flabby strings; it nails us to the chair, gorged and stupefied, apoplectic and gasping, with [a] sensation of uselessness …” he wrote. “Our thoughts wind round each other, get mixed up and tangled like the vermicelli we’ve taken in.”

Marinetti collected the best testimonies from scientists, chefs, and literary firebrands like Ramperti and reproduced them in 1932’s La Cucina Futurista (“The Futurist Cookbook”), which also contained Futurist recipes and instructions for hosting various kinds of Futurist dinner parties. But the 1930s were an exceptionally tumultuous decade for the country—which faced the Great Depression.

Adolf Hitler’s growing influence, a war with Ethiopia, the Spanish Civil War, and eventually World War II—and Italian citizens were focused less on what they were eating and more on merely eating. Furthermore, Futurism soon ran afoul of fascism. In 1937, Hitler decried modern art as “degenerate,” anti-nationalist, and somehow inherently Jewish. Though Marinetti spoke out against these associations, anti-Semitism had already infected Italy, and fascists started condemning the Futurist movement. Since Mussolini was courting Hitler as an ally, his regime’s ties to Futurism could quickly have become a political liability. In 1939, when Marinetti published a fiery denial of Hitler’s accusations in a Futurist journal called Artecrazia, the government forced it to shutter.

So, by the 1940s, Marinetti was no longer spewing consistent vitriol against pasta, Il Duce was no longer supporting the Futurist movement, and the world at large was consumed with much greater threats than linguini-induced languor. And if Marinetti ever entertained fantasies about resurrecting the cause after the war, he never got the chance—he died of a heart attack in December 1944, just months before the deaths of both Mussolini and Hitler the following April.