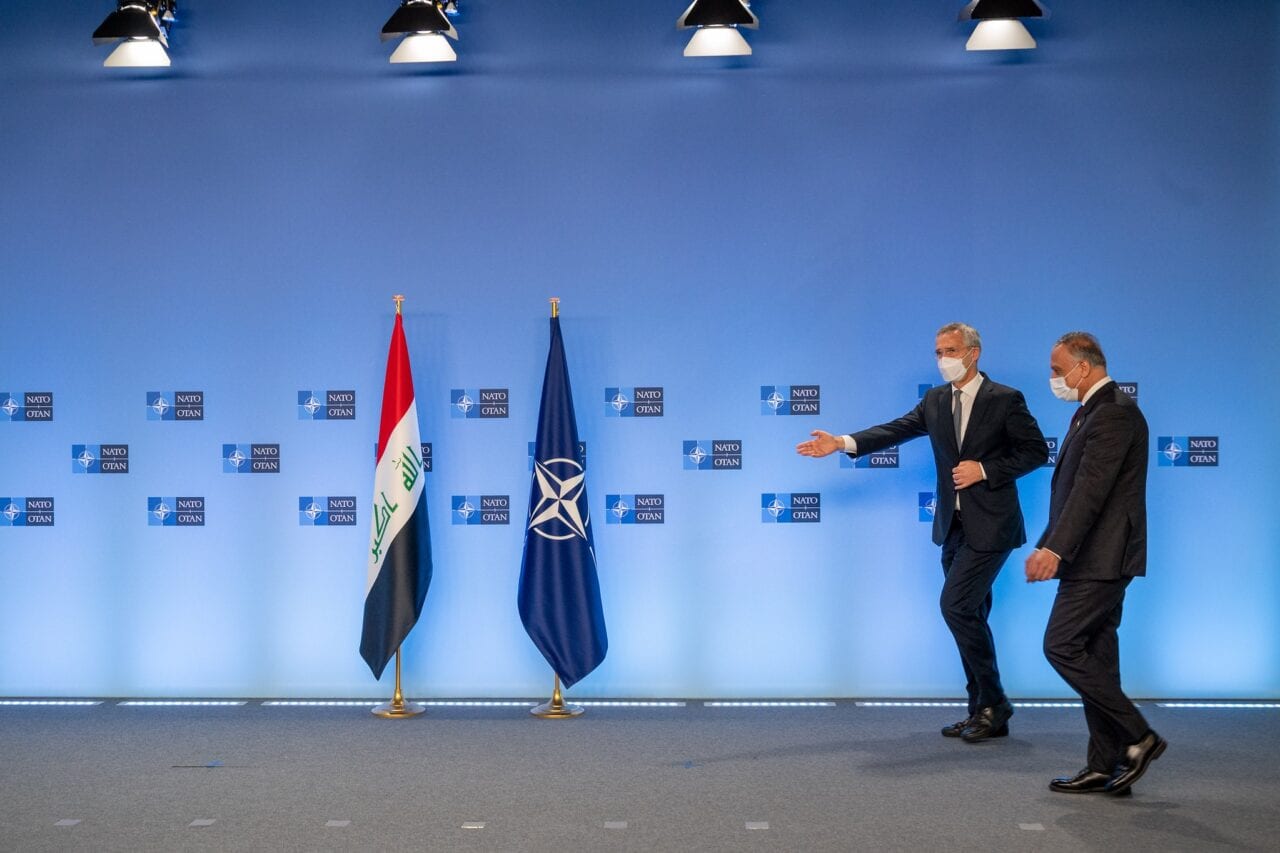 The MED This Week newsletter provides expert analysis and informed insights on the most significant developments in the MENA region, bringing together unique opinions on the topic and reliable foresight on future scenarios. Today, we focus on Iraq, where both US and Iraqi paramilitary groups’ attacks are on the rise, while Prime Minister al-Kadhimi’s visit to Europe could pave the way for an enhancement of NATO’s engagement in the country.

In early July, Iraqi Prime Minister Mustafa al-Kadhimi embarked on a European tour to strengthen Baghdad’s cooperation with some of its main allies in the West. Along with Belgian and EU authorities (such as the President of the EU Commission, Ursula Von der Leyen), al-Kadhimi met with the NATO Secretary General Jens Stoltenberg in Brussels. During the conference, the Iraqi Prime Minister asked for a prompt expansion and diversification of NATO’s role in Iraq. While NATO has already committed to increasing its personnel to 4,000, Baghdad seeks to expand this cooperation through a purely non-combat, training, and advisory mission to enhance Iraqi security forces’ resilience in counter-terrorism operations. Al-Kadhimi’s requests come at a precarious moment for Iraq’s domestic security context. Today, Iraq is still struggling with the persistent threat posed by the Islamic State (IS), widespread power outages, and the growing confrontation between American and Iranian-aligned forces. Since the beginning of 2021, over 40 attacks have been carried out against US personnel in Iraq, where 2,500 US soldiers are still deployed as part of a global coalition to fight IS’ dormant cells. On June 28th, the US Air Force conducted retaliatory raids on pro-Iranian militias’ facilities along the Syrian-Iraqi border, causing complaints by Iraqi authorities and escalating the risk of tit-for-tat attacks by Iranian-supported militias in Iraq. At a time when US military presence in Iraq is shifting, NATO’s support is becoming pivotal to provide ISF the help they need. At the same time, this cooperation would also open a new window of opportunity for European countries, including Italy, who will lead the NATO Military mission in Iraq (NMI) from next May.

A long-term strategy is needed to de-escalate and halt attacks in Iraq
“The recent US strikes on Iraq-Syria border have rallied key Iraq’s Shiite political forces behind the ‘Axis of resistance’ in calling for the withdrawal of US forces, deepened tensions between the government and paramilitaries and offered reasons for these groups to launch more attacks in retaliation. Attacks are likely to increase, driven by domestic and regional motives. While conducted by Iraqi groups, attacks also help Iran apply pressure on the US to speed up sanctions’ relief and project power against regional competitors. For their part, Iraqi paramilitary groups seek a new role in the Iraqi landscape after the defeat of the Islamic State. Attacks help their commanders boost credibility in front of their members and reassert hierarchies after their leader Abu Mahdi al-Muhandis. In the coming months, Biden may have to alternate military responses with a long-term strategy to de-escalate and reach a sustainable halt on attacks. Responding with a confrontational approach may backfire. It offers these groups and their commanders’ roles and reasons to double down on attacks, exposes the weaknesses of the Iraqi government, and forces the Biden administration into military interventions at a time when it wishes to pivot away from the Middle East.”