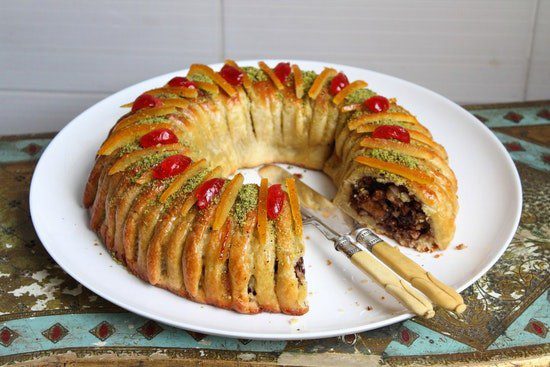 BUCCELLATO SICILIANO
Leading up to Christmas, the Buccellato represents the glory of Sicily. If you decide to make it, measure carefully, be patient and have fun.
Flavors and Knowledge

Buccellato is an ancient baked dessert consumed during the Christmas period throughout Sicily. Its name derives from the Latin civilization, where the “buccellatum” was a type of donut-shaped bread engraved along the edges that vaguely recalled the current Sicilian Buccellato. In some areas, the Buccellato is also called cudduredda, a Sicilian term of Greek origin that means “little crown.” Buccellato is a Sicilian shortcrust pastry donut decorated with candied fruit and stuffed with a rich filling of dried figs, raisins, almonds, orange peel, and other ingredients that vary depending on the island’s territory. Perhaps even more popular than Buccellato is the buccellatini. Made with the same process and ingredients as the Buccellato, they are biscuits often engraved to form small spirals and croissants. However, unlike Buccellato, buccellatini are garnished with simple icing sugar or sugar glaze and colored beads or tails.

The recipe belongs to Anita from Mangia Magna. Check her site, where she offers several delectable recipes and a cookbook available for purchase.

One lb. of dry figs stemmed and cut into 6 to 8 pieces

¼ cup of bitter cocoa or equivalent bitter or semisweet chocolate

One teaspoon of ground cinnamon

red wine to cover ( over a pint)

1 cup coarsely chopped almonds (use a blender to chop)

1 ½ cups of lard or vegetable shortening, or three sticks of unsalted butter

To ready the orange peels for the filling, rinse with cold water, dry, and bake at 375 degrees for 15 minutes. When cooled, cut them with scissors into skinny strips to resemble “angel’s hair”-capelli d’angelo.

In a large pot without a cover, at medium heat, place the figs, raisins, almonds, cocoa, black pepper, cinnamon, cloves, 1 cup of sugar, orange peels, and the red wine to cover the ingredients. Simmer at meager heat, stirring often. Do not cover!

After 20 minutes, stir in the vanilla and continue simmering until the filling absorbs the wine. It takes about 45 minutes. The mixture should be chunky.

Transfer into a large bowl to cool, cover tightly with plastic wrap, and store in the refrigerator, up to 3 days until ready to use.

Place the milk, sugar, honey, and lard in a pot, shortening or butter, warm the mixture and melt the fat at low heat. Cool it off.

Use a mixer or on a flat surface, mound the flour, mix in the baking powder and form a well. Add the liquid mixture to the dry ingredients, and using your hands, start to blend the flour from the inside of the well and keep incorporating the flour into the liquid mixture. Mix thoroughly and bring the dough together to form a ball. If the dough is to dry, add a few drops of water to moisten.

Fold and press with the palm of your hands; if dough is sticky, add some more flour. Do not over mix.

When dough forms into a single mass, cover with a kitchen rag or plastic wrap, set aside, and refrigerate for at least 30 minutes.