politicamentecorretto.com
Home Esteri Why Does Pakistan lag behind Bangladesh? 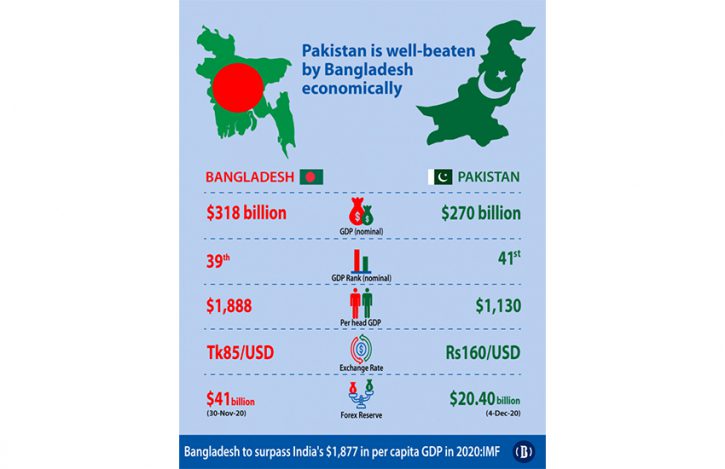 Why Does Pakistan lag behind Bangladesh?

Bangladesh recently celebrated its 50th founding anniversary. In 1972, Henry Kissinger, the US Secretary of State, described Bangladesh as a “bottomless basket” for an independent country. On the other hand, in 1976, Norwegian economist Just Faland and American economist JR Parkinson published a book from London called ‘Bangladesh the Test Case for Development. The book says, ‘Bangladesh is a testing ground for development. If Bangladesh can solve its development problems, then it must be understood that any country can improve. ‘ Successful statesman Sheikh Hasina has achieved full potential to move from a least developed country to a developing country. Even before the 50th anniversary of independence, Bangladesh has come a long way than that of Pakistan.  It has been possible for People’s hard-working and a strong leadership.

In the ’70s, independent Bangladesh was recognized by the world as a city plagued by food shortage, famine, and natural disasters. But in the last 50 years, the image of Bangladesh has been discussed in different contexts. Now, positive aspects predominate in discussions about Bangladesh. Bangladesh has always tried to build a bright image in the world by highlighting its various achievements. In 50 years, Bangladesh has overcome many negative images.

Abid Hassan, a former adviser to the World Bank and a Pakistani economist, wrote a few months ago praising Bangladesh’s economic potential, saying that even 20 years ago, it was unthinkable that Bangladesh’s per capita income would double in 2020. If Bangladesh’s current progress continues, it will become an economic powerhouse by 2030. He further wrote that if the current situation in Pakistan does not change, it may be necessary to seek help from Bangladesh by 2030.

Human resources are considered to be the most important element in the development of any country. So that Bangladesh has now surpassed not only Pakistan but also India in several indicators. Various international organizations, including the World Bank, the World Economic Forum, and the Economic Intelligence Unit, have identified Bangladesh’s economic development as a ‘wonderful puzzle’. From 2011 to 2019, Bangladesh’s exports have increased at a rate of 8.6 percent per annum as compared to 0.4 percent in the world. GDP per capita has risen to 2,554, compared to Pakistan’s 1,543. On the other hand, while the current economy of Bangladesh is 410 billion, the size of Pakistan’s economy is about 260 billion. Nobel laureate economist Amartya Sen always cited Bangladesh as an example when it comes to the development model. During a visit to Bangladesh last year, Kaushik Basu, then senior vice president and chief economist at the World Bank, said Bangladesh’s economy was now in a flying start. “It would not be an exaggeration to say that Bangladesh will soon emerge as the new tiger of Asia,” he said.

At the age of 50, Bangladesh is going to be the economic wonder of South Asia. Although Bangladesh (then East Pakistan) was part of Pakistan, it has already surpassed Pakistan in almost all socio-cultural and economic indicators.

The main reason for this progress of Bangladesh and the backwardness of Pakistan is that in the last ten years Bangladesh under the leadership of PM Sheikh Hasina has achieved an average growth rate of 7% and has been ranked as the fastest-growing country in Pakistan. It is on the bottom. In addition to this, the population is also increasing the problem of Pakistan. While the population of Pakistan was 1o million less than that of Bangladesh in 1971, it is now about 4o million more. At this time the population growth rate of Bangladesh is 1.2 percent whereas that of Pakistan is 2.1 percent, which is almost double. On the other hand, Pakistan has lagged behind due to social conditions. Property management is such that all property is in the hands of a small number of people. Besides, it goes without saying that women do not have rights in the country. Bangladesh ranks 50th out of 153 countries in the Gender Parity Index, while Pakistan ranks 151st; In other words, it has fallen to the bottom. According to the International Labor Organization’s 2019 data, the participation rate of women in the workplace in Bangladesh is 38 percent, which is 23 percent in Pakistan. Honor killings still exist there.

A few years ago, former cricketer Imran Khan came to power after being elected as the Prime Minister of Pakistan and announced that he would run the country on the Swedish governance model. He also dreamed of transforming Pakistan into Sweden in five years. As a result, discussions began on a role model across Pakistan. It was at this time that a column written by Jaigham Khan, a development activist, was published in The Nation. The article titled ‘The Bangladesh Model’ suggested that Pakistan should become Bangladesh instead of being transformed into Sweden. One after other statements came in support of Jaigham Khan’s proposal.

Columns started appearing in the media. Talks are also discussed on television talk shows. One such talk show is viral through clipping social media. There, negotiator Jaigham Khan said in a very strong voice, there is no point in using the example of any other country, Pakistan should try to be Bangladesh first. And it will take at least 10 years. Until then, Bangladesh will go a long way in terms of development. The people of Pakistan are now thinking that the country which was separated from Pakistan after a long and bloody war of nine months is a role model. This information is enough to show how far Bangladesh has come. (Daily Times, Pakistan)