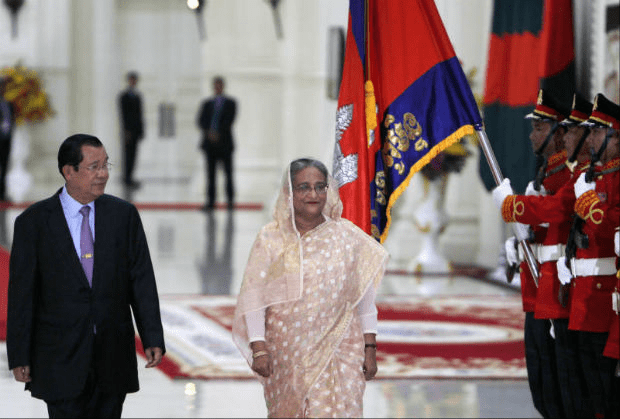 In the face of numerous propagandas against Bangladesh where it is claimed that Bangladesh might face the same fate as Sri Lanka, eminent international columnists have championed in favour of the Bangladesh model of economy. This proves that Bangladesh is at a far better position economically than most of its neighbors. The South Asian Island nation of Sri Lanka is currently undergoing an extreme economic crisis that has put the entire country in chaos. Weak political leadership, wasteful mega projects and the effect of covid-19 has totally damaged the Sri Lankan economy. Bangladesh, on the other hand, despite undergoing similar situations like Sri Lanka but successfully managed to put a stable lid on its economy. In more simpler terms, Sri Lanka can try to emulate the Bangladesh model of economy during this turbulent period.

“Strong leadership is one of the main features behind the ‘Bangladesh Model’. . .Sri Lanka can follow this model to overcome its crisis,” reads an article published in May 20 in a popular Cambodian newspaper. Cambodia suggests Sri Lanka to follow Bangladesh to overcome iys ongoing economic crisis.

According to the article, in his first TV address after assuming office, Sri Lankan Prime Minister Ranil Wickremesinghe listed the grave challenges ahead of him, but assured the people of his determination to meet them successfully. “There may be an example for him. He can overcome the crisis by following Bangladesh’s PM Sheikh Hasina Model,” the article reads.

The public outrage directed at the government sparked enormous street protests and political turmoil, compelling Prime Minister Mahinda Rajapaksa and his Cabinet to quit and a new prime minister to be appointed. Given the expanding trade deficit and foreign debt burden, many in Bangladesh fear that their country would face a similar position.

With Sri Lanka in economic and political turmoil, there are fears (in the eye of some pessimistic economists) that Bangladesh would face a similar situation. But most of the economists in Bangladesh, on the other hand, believe that the country’s economic characteristics are sound. Bangladesh will not be in the same scenario as Sri Lanka. Bangladesh is improving across the board. The Padma Bridge may now be seen. The comparison of Sri Lanka’s economy to Bangladesh’s is motivated. Those who claim that the situation in Bangladesh will be similar to that of Sri Lanka are either lying or spreading false information. The Padma Bridge is being built entirely on its own dime. Once the bridge would be opened, people will get benefits. The GDP will increase.

Bangladesh’s foreign debt is only 12 per cent of GDP, which is about 48 per cent in Sri Lanka. The average interest rate against the foreign loans taken by Sri Lanka is 7.5 per cent, while that is 1.4 per cent in case of Bangladesh, he said.

When a country can’t repay their loans, it becomes bankrupt. “But there is no possibility that we would fail in repayment of any sort of loan instalments even in the next 5-10 years,” he added. The country has attained 6.94 per cent GDP growth in the last financial year. “We expect that the GDP growth would be above 7.2 per cent in the next financial year

After overcoming the corona crisis, the economy of Bangladesh stands at a balanced level up to the grassroots level and there is no such crisis in Bangladesh. Bangladesh will never be like Sri Lanka for many causes. Bangladesh’s capital account is not open. Unlike in Sri Lanka, none can send dollars abroad if he or she wants. If anyone wants to send money abroad for any education or medical work, he or she has to open an account to send it.

In the case of talking about mega projects, Padma Bridge is not dependent on foreign loans as Prime Minister Sheikh Hasina is building it with the people’s money. No such mega project is implemented with the help of foreign loan. PM Hasina has shown the abilities of Bangladesh to the world.

On the other hand, the economy of Bangladesh is not dependent on any single sector. The financial sectors of the country were active even during the pandemic. There is no shortage of food production. Bangladesh’s export earnings and remittances have not reached alarming levels. The country is not dependent on staple food imports. Its foreign exchange reserves are USD 44.40 billion while Sri Lanka’s reserves are less than USD 2 billion. The per capita debt of Bangladesh is 292.11, which is 1650 dollars in Sri Lanka.

It has been informed that the Padma Bridge will be launched in June. Metrorail, Bangabandhu Tunnel and some special economic zones will also be inaugurated this year. The launch of these projects will add a new dimension to the development of Bangladesh. Total domestic production will increase. Everything is important and necessary. If these projects are implemented, the return will come immediately. Investment in the country will increase. There will be employment. GDP growth will increase.

The most important thing is that in all the projects of Bangladesh, big and small, the World Bank, ADB, IDB, JICA and other development agencies have added loans. The interest rates of these financial institutions are very low and the load can be repaid over many years. Some of the loans, however, are later given as grants to other projects. This is especially true of most JICA loans.

Although there is a downside to receiving remittances because of the corona epidemic and the Russia-Ukraine war, Bangladesh continues to show a surge in export earnings. The condition of remittances is also miserable. The negative impact of organic farming has exacerbated the crisis in Sri Lanka. But there is no big negative news in the agriculture of Bangladesh.

There is no concern about the amount of food stock in Bangladesh. But that’s exactly what we have to learn from Sri Lanka, we need to be careful. We need to stop siphoning off money from our country into other countries. Corruption, irregularities, and waste must be reduced. It would be better to avoid luxuries and walk the path of austerity in all cases.

The administration of Prime Minister Sheikh Hasina has taken many initiatives to cut spending and conserve foreign currency reserves. It has decided to halt official travel abroad and postpone a few smaller projects that require imports from other nations. Hasina also asked citizens to contribute by practicing austerity and exercising caution when making financial decisions. The prime minister had previously issued instructions to government personnel on how to practice austerity. She urged the private sector and the general public to save money today.

But the BD government needs to be extremely careful with economic management. While the experts don’t see any imminent economic crisis, they believe that good governance and financial management are needed to ensure Bangladesh doesn’t end up facing a situation that Sri Lanka now finds itself in. But Sheikh Hasina administration has instructed to maintain good governance and financial management which is very praiseworthy. Bangladesh’s economy is “vibrant,” and the administration has exercised “great prudence” to avoid a disaster similar to that in Sri Lanka. Thus, Bangladesh will suffer a situation like the economic crisis in Sri Lanka, such a comparison was “unacceptable”.