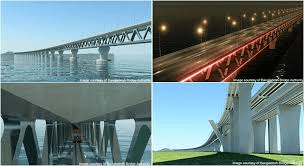 Story Of Bangladesh’s Padma Bridge: More Than Just A Bridge?

Dr. Malika-e-Abida Khattak from Lahore, Punjab, Pakistan, is an educator, and researcher

Bangladesh’s much anticipated Padma Bridge, also a dream project of theBangladesh, is going to be inaugurated on June 25 this year and Prime Minister Sheikh Hasina Wajed will inaugurate the long-awaited bridge at 10:00am.

The commuters of 21 districts of the south-west part of the country cross the Padma River via ferries through the country’s Banglabazar-Shimulia route. Passengers and drivers have to suffer from long traffic jams. When functioned, it will be the largest bridge in Bangladesh and the first fixed river crossing for road traffic. The two-level steel truss bridge will carry a four-lane highway on the upper level and a single-track railway on a lower level.

As the Padma Bridge, the dream of millions in the south, is going to be inaugurated next month, the miseries of people are going to be ended. The multipurpose bridge, a dream project of Bangladesh connecting the Mawa point of Munshiganj and the Jajira point of Shariatpur in Bangladesh, will make the journey easier for commuters and freight vehicles, and gradually boost the country’s GDP by 1.3-2%.

The Padma Bridge which is designed in two-tiers with steel-truss composite keeping road on the top and rail below is the deepest foundation bridge in the world. After inaugurating the Padma Bridge on the east side on June 25, Prime Minister Sheikh Hasina will address a mammoth rally on the other side of the river, her first public appearance in the south-western part of the country since late 2018.

Bangladesh’s Prime Minister Sheikh Hasina Wajed, the epitome of her country’s development, showed the confidence and foresight by creating a world example like Padma Bridge. She had to walk on the path of huge obstacles but she has reached her destination. She established the truth by firmly confronting the conspiracy that was spread at the birth of the bridge.

The Padma Bridge bears the signature of Ms. Hasina Wajed’s visionary leadership. The world got a chance to know once again the capacity of Bangladesh in Hasina era. Bangladesh is a country that has repeatedly shown its capabilities.

The World Bank stopped financing to construct the bridge without holding board meeting with the connivance of a person bringing a false corruption allegation which was later proved baseless. Canada court didn’t find no proof of Padma bridge bribery conspiracy.

The then communications minister Abul Hossain had to resign from the cabinet. This was the beginning picture of the construction of the Padma Bridge. But after the construction work started, a great challenge came up. Bold and groundbreaking engineering skills were required in river governance and piling. At the same time construction costs continue to rise.

Rumors were spread that man’s head would be needed to build bridges. The government has also dealt with it efficiently. It is not only the Padma Bridge that is being built due to the indomitable will of Sheikh Hasina, but also the work of Metro Rail and country’s biggest Tunnel is nearing completion. They will be open to the public this year. Many mega projects are going on at the same time.

Padma Bridge is a multi-purpose road and railway bridge built over the Padma River in Bangladesh. The south-western part of the country will be connected to the north-eastern part. Construction of the 6.15 km long and 18.10 m wide bridge started on 7 December, 2014.

Today the Padma Bridge is visible. The bridge of pride stands today. As a result of the construction of the Padma Bridge with its own money, the economic potential and image of Bangladesh have been established all over the world. A bold decision by the Prime Minister has earned him international recognition as a self-confident, determined statesman. Bangladesh’s economic progress, continuous GDP growth, and improvement of Bangladesh’s position in various social indicators are recognaized internationally today. The sacrifices made by the Prime Minister for this bridge, the success of the implementation of the Padma Bridge project have made that sacrifice justified.

There will be massive development of agriculture. The bridge will create a groundbreaking chapter in the transportation of agricultural commodities from the southwestern region to capital. Farmers will get good prices for their produce. Extensive industrialization will take place in the southwestern region of the country centered on the Padma Bridge.

The Padma Bridge could become a part of the Fourth Industrial Revolution. There will be a revolution in the field of communication and transportation. The development of the tourism industry will be achieved through the bridge. A 6-lane expressway has been constructed at the country’s Munshiganj and Shariatpur sections of the bridge which is very eye-catching and captivating.

This bridge will play a unique role in the field of culture. Resorts, hotels and restaurants will be built around this bridge where Bengali food will be served which will make Bengali culture more familiar to foreigners. The Padma Bridge will increase the country’s GDP and increase per capita income.

This bridge will further strengthen the rail link with the southwestern part of the country. People will be able to travel comfortably in a short time from Dhaka.

Various business establishments will be built around the bridge and the standard of living of the people of the South West will be multiplied.

Sheikh Hasina Wajed has taken the great challenge of Padma Bridge and won.  Bangladesh has already become a developing country. Padma Bridge will take the country faster. This bridge will play a unique role in taking Bangladesh to line of developed countries.