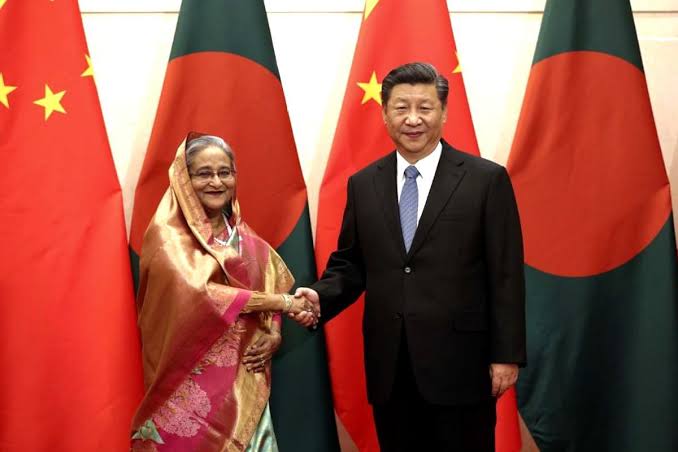 China’s envoy to Bangladesh has applauded Prime Minister Sheikh Hasina’s leadership for building Padma bridge with the country’s own finance and described the Awami League-led government’s achievements in Bangladesh during the last decade as “extraordinary.

Li Jiming, the Chinese ambassador in Dhaka, has lauded Prime Minister Shekh Hasina’s decision to proceed with the Padma Bridge project using local money despite the failure of outside funding, expressing doubts that an average leader of any country could have done so.

He emphasized Bangladesh’s progress and development during Hasina’s 12 years as Prime Minister, including economic growth, infrastructure development such as the Padma Bridge.

‘I wonder, I truly doubt, if any typical leader of any country could have made such a difficult decision as she did,’ he told a small gathering of journalists at the Chinese consulate in Dhaka on June 19.

Without mentioning names, the ambassador stated that several international development partners did not believe the Bangladesh government could ever build such a megastructure with its own funds.

“Despite all the uncertainties, pressures, and claims,” he continued, Prime Minister Sheikh Hasina opted to build the bridge using Bangladesh’s “own money, 100 percent Bangladesh’s own money.” The decision, according to the ambassador, needed “extreme courage and a great sense of political responsibility” on the part of any government leader.

The ambassador stated that under the leadership of Bangladesh’s prime minister, the bridge became a solid reality arising from a vision, and that “nobody will ever question that Bangladesh can achieve it.”

Chinese ambassador has uttered and unveiled the truth. Thank you, China, for showering praise on a reality.  On July 4, 2001, Prime Minister Sheikh Hasina lay the foundation stone for the Padma Bridge, which will benefit more than 30 million people in 21 districts throughout southern Bangladesh. The 6.15-kilometer bridge, which includes a four-lane highway and a one-lane railway, is now a reality.

PM Sheikh Hasina made it a reality today in the face of hundreds of difficulties, obstructions, bogus claims, and World Bank machinations.

On July 8, 2012, Prime Minister Sheikh Hasina stated unequivocally in this great National Assembly that the Padma Bridge would be built at Bangladesh’s own money. Leadership is critical in all areas of life where human resources are utilized, including organizations, entrepreneurship, corporations, politics, societies, and states. Leaders perform the most important function at the state level in setting directions, encouraging people, boosting morale, allocating responsibilities, and improving satisfaction in order to steer a nation forward. The people of Bangladesh are fortunate to have a leader who has nearly all of these characteristics and has been guiding the country in the path of realizing her father’s dream of becoming the country ‘Sonar Bangla’ (Golden Bengal). Sheikh Hasina’s imaginative, daring, indomitable, and cautious leadership is exemplified by the construction of the Padma Bridge.

Everyone is familiar with the bridge’s history. Because of the prime minister’s unwavering determination to achieve her objectives, the bridge is now visible. She did not limit herself to giving commands during the entire era, from the planning of the bridge to the present day; rather, she became involved in the megaproject and provided vital counsel when needed, as well as boosting the morale of the project’s workers. Now, with the bridge ready to open to the public in a few months, the prime minister has paid a personal visit to the bridge and walked for two hours across it.

Her choice to build the bridge on the country’s own funds gives the Bangladeshi people the much-needed motivation to overcome obstacles and grows themselves without relying on outside assistance. It has and will continue to assist the country in becoming self-sufficient in all areas. She has successfully instilled in the general public the concept that we can do anything if we have a strong will and resolve to do so, which is undoubtedly a significant victory for her as a leader. At the same time, having a dreamer as a leader is a question of pure luck for a country.

“We know that if Bangladesh claims they’ll do it with your money, they’ll be able to do it… “Do we believe that and that we are correct?” he stated “Not everyone is thrilled, but Chinese people are,” the envoy said, adding that some people may not like seeing Bangladesh’s historic achievement over the bridge.

The envoy expressed his pride at the bridge, not only because it was built by a Chinese company, but also because it will serve as a watershed moment in China-Bangladesh cooperation and serve as an everlasting connection of brotherhood between China and Bangladesh and two peoples by heart, guiding the route to common prosperity and a shared future.

No one can deny it, and everyone recognizes that Prime Minister Sheikh Hasina’s heroic action has transformed the Padma Bridge from a dream to a reality. Sheikh Hasina’s bravery has undoubtedly resulted in the construction of the Padma Bridge. The Padma Bridge is the most significant gift commemorating the birth centenary of Bangabandhu, the Father of the Nation. It is not simply the bridge across the Padma; it has raised the Bengali nation’s confidence to such a level that they can achieve anything. And it was their bold Prime Minister who reawakened this confidence. The father provided independence for the country, while the daughter provided prosperity.

China praised the Premier for successfully completing the much-needed bridge despite all the intrigues. China knows to evaluate the right person.

PM Sheikh Hasina announced the construction of the Padma Bridge during the country’s acute image crisis following the World Bank’s loan cancellation due to corruption allegations.

Bangladesh has proven to the world its capacity under Prime Minister Sheikh Hasina’s leadership by building a 6.15km bridge over the country’s second-toughest river using its own money. Bangladesh’s finance ministry gave Bangladesh Bridge Authority with a credit of 3 billion USD.

The construction of the bridge is viewed as the most significant achievement of the Awami League government, which has had to deal with “conspiracies” that led to the World Bank canceling a pledged fund in 2012 due to a corruption charge that was eventually proven untrue.

Prime Minister Sheikh Hasina, on the other hand, has been able to clear up all of the ambiguity while also overcoming all of the financial and technical obstacles.

The Padma Bridge is made of more than just concrete. It combines People’s love and pride. It was built with its own money by Sheikh Hasina. She has bravely put it into action for the love of people.

Bangladesh’s dignity in the world has improved as a result of the bridge’s building using its own funds. The bridge has brought the Bengali nation’s dignity and respect to the world’s attention.

True happiness comes from the satisfaction of well-done deeds and the excitement of creating something new… well done, Bangladesh, under Prime Minister Sheikh Hasina’s capable and vibrant leadership. Congrats! She’s put in the finest effort… China’s praise on Bangladesh PM for building Padma bridge is recognition of Bangladesh success story.