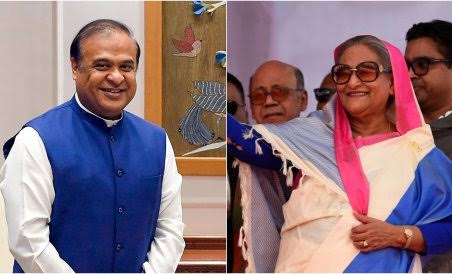 Assam CM Himanta Sarma plans to visit Bangladesh to strengthen ties. Off course, Assam CM’s upcoming Bangladesh visit can take the Indo-Bangla-Assam ties to new heights. There is no doubt regarding that. Basically, the visit is very necessary at this time. Bangladesh-India basically Northeast India will benefit from the visit.

India’s Assam Chief Minister Himanta Biswa Sharma may visit Bangladesh shortly to strengthen relations with Bangladesh. He confirmed this in a tweet.

According to media report, it is known that 25 freedom fighters are staying in Assam on a three-day visit. The Chief Minister of Assam had a meeting with them there.

After the meeting, Himanta said on Twitter that Assam had an important contribution in the liberation war of Bangladesh in 1971. 9 heroes of Assam were martyred in that war. Even some policemen of the state trained Mukti Bahini at that time.

According to the Chief Minister’s Office in Guwahati, Bangladesh has already extended an invitation to Assam’s Himanta Biswa Sarma to travel to Dhaka. Bangladesh’s Foreign Minister Dr. A.K. Abdul Momen lauded Mr. Sarma’s “creative enterprises” in a letter he sent on July 5 and stated that the visit will give both parties a greater knowledge of the development efforts being made in Bangladesh.

In a congratulatory message sent to the Chief Minister of Assam, Bangladesh Prime Minister Sheikh Hasina said, ‘Bangladesh is waiting for joint action along the border to fight the curse of Corona.’ The Prime Minister said, “Our prayers and best wishes for the people of Assam and India.”

Sheikh Hasina said, ‘Bangladesh and India have warm, deep and diverse relations. Assam is also a partner in this relationship. Himant replied. Assam Chief Minister Himanta Sharma said in a tweet, “I highly value and respect the wishes of Hon’ble Prime Minister Sheikh Hasina.” Assam is determined to follow the policies of our Prime Minister Narendra Modi. Who recently visited Bangladesh and said, “Let India and Bangladesh move forward together?”

This time, the Chief Minister of Assam praised Sheikh Hasina for fighting terrorism. He is satisfied with Sheikh Hasina’s work. Prime Minister Sheikh Hasina’s role against terrorism and militancy has established peace on Indian soil as well. Himanta Biswa Sharma said that Assam has become the most peaceful state in India only because of the strong action of Sheikh Hasina. His action against ULFA (Separatist Organization of Assam) leaders contributed to peace in Assam. Himanta admits this.

It is noteworthy that the role of Sheikh Hasina in this regard is as mentioned. Assam is now a peaceful state. which was not there before. Himanta said this in the evening of Tuesday, July 19, at the state guest house ‘Kainadhara’ in Guwahati, Assam, during an exchange of views with the visiting delegation of Bangladesh freedom fighters.

Requesting the freedom fighter delegation to convey gratitude and greetings to Prime Minister Sheikh Hasina, Assam’s Himanta Vishwasharma said that Assam has now become the most peaceful state in India due to the strong action of Sheikh Hasina. Assam Chief Minister said, Sheikh Hasina’s action against ULFA leaders has helped us. We are deeply grateful to him for that. He thanked the Prime Minister of Bangladesh.

Bangladesh is working on numerous large-scale infrastructure and energy projects, including important airports, bridges, and power facilities like the Rooppur Nuclear Power Plant, which have the potential to spur regional economic growth. It requires close coordination with the governments of West Bengal, Assam, Meghalaya, and Tripura for trade, connectivity, and resource management, and in recent years there have been calls in Dhaka to engage these States directly to impress upon them the necessity of working closely to address shared issues.

Bangladesh and India are bordering countries. Bangladesh and India have a warm, deep and diverse relationship. Both countries are celebrating the 50th anniversary of bilateral relations. Assam is also a partner in this relationship. Bangladesh shares its borders with five Indian provinces, including Assam. As the largest state in the Northeast Region (NER) of India, Assam shares nearly 263 kilometres of the border (land and riverine) with Bangladesh. Given the size, population, and location, Assam’s participation in trade and commerce with Bangladesh is important for the Indian government. Thus, Assam is an important factor for Bangladesh.

Although Bangladeshi tourists are interested in traveling to the state, many cannot come because of the lack of easy communication. Keeping this in mind, the flights from Dhaka to Gauhati route are being resumed soon. At the same time, bus services are being started on Gauhati-Shillong-Dauki-Sylhet-Dhaka route.

He said, we will start regular flights on the Dhaka-Guwahati route within the next three months. Before the corona epidemic, our bus used to go to Dhaka via Gauhati-Shillong-Sylhet. It was closed due to Corona. Now we have got permission from concerned ministry to start it again. Hope the bus service on this route will be started soon.

Himanta said, I think there is a lot of potential to develop economic relations between Bangladesh and India’s Northeast. Thanks to Bangladesh’s waterways, the North-Eastern region has been connected to the Indian mainland. There is also an agreement to import goods from Bangladesh (into Assam). We are putting more emphasis on developing mutually beneficial economic relations. Now time to utilize the potential through the visit.

Bangladesh and Assam can bolster more border trade along the border. This will encourage international trade by land and increase trade volume. Tourist exchange between Bangladesh and NER region specially Assam can be a potential sector. Bangladeshi tourists can visit Assam through their borders. Assam must strengthen the past ties between the people of Assam and the people of greater Sylhet on the border. Both parties should strengthen connectivity between the two countries by reopening long-suspended rail, road and waterway connections.

There might have some bilateral issues (NRC) between Assam and Bangladesh. But these issues should be properly addressed and resolved diplomatically and politically. Bangladesh and Assam must reap the benefits from strengthening trade and connectivity ties. There are a lot of potentials an increase in exports of goods from Bangladesh and vice versa. Assam also should put its contributions to Bangladesh. Assam can make the Indian Central Government understand and urge to stop border killings along the India-Bangladesh border, sign the Teesta water-sharing deal as soon as possible, support Bangladesh in case of Rohingya crisis solution. As Assam CM is seen as a potential leader in whole India, he can contribute a lot of to bolster the ties between the two neighbours.