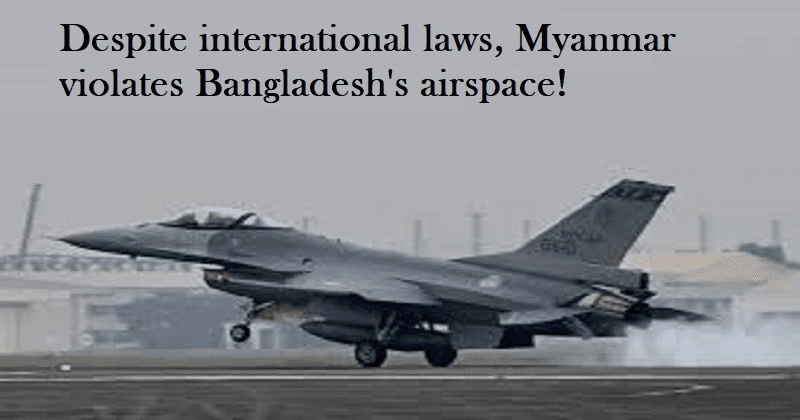 The bullets fired from Myanmar have arrived inside Bangladesh at Ghumdhum-Tumbru border of Naikxyongchari upazila of Bandarban district. As of writing this report (Saturday, 6.25 p.m.), shelling is still going on in Myanmar. Shelling has been going on in the border areas of the country for several days. On Friday (September 9) afternoon, the firing took place in bordering Myanmar territory. The bullets fired from there have reached Tumbru area. It is reported that there were no casualties.

Local people reported that the bullets fired from Myanmar have landed in Konapara on the Tumbru border. However, there were no casualties. Gunshots are heard across the border. The shelling was stopped for only two days in between. Since then, there has been shelling. Bangladesh authorites are monitoring the border.

The firing started from 3:30 pm today. Later in the evening, locals reported that a small arms fire was heard in Ward No. 3 Tambru Ghonarpara area. However, no casualty was reported.

According to media reports, the firing has been going on at the border since afternoon. Gunshots are still heard. People are afraid because it is night. People heard that another bullet from Myanmar has landed here today. Fighter planes were also seen in the sky.

People living on the border say that from the afternoon, suddenly, there is a rain of gunfire on the Myanmar border in the middle of Tumbru border in Naikshyongchari. Today is getting more words than other days. Gunfire was heard till 8 pm. There was also an incident of firing from Myanmar in Tumbru Konarpara. The border people are also in fear.

Superintendent of Police (SP) Tariqul Islam Tariq of Bandarban said that the matter is being investigated. Meanwhile, more than 4,000 Rohingyas have been living on the zero line of the border for five years. In addition to firing mortar shells in the border areas for several days, warplanes are also firing in the border air. Rohingyas living in noman’s land are living in fear.

In this regard, The shelling has started since 3 pm. Still running (8pm). There is a lot of heavy gunfire coming in today. In this, the Rohingyas of the zero line are very afraid.

Meanwhile, at 9:30 a.m. on September 3, two shells fired by Myanmar warplanes fell in the Ghumdhum area of ​​Naikkhyongchari upazila in Bandarban. Earlier on August 28 around 3 pm, a mortar shell fired from Myanmar landed unexploded near the Tumbru North Mosque in Ghumdhum. Bangladesh protested in both cases.Myanmar launched at least two mortar shells at Bangladesh on September 3, violating international law. Five days earlier, Bangladeshi officials summoned Myanmar’s envoy to Dhaka and expressed their outrage at Myanmar’s August 28 firing of two deadly bullets at the same location. According to the Ghumdum police investigative centre, at least two fighter aircraft fired roughly eight bullets across the border, while two military helicopters fired more than 30 rounds.

Bangladesh has reiterated its profound concern about Myanmar’s violation of an air border agreement. The Arakan Army is ready to crush the insurgents, but the Myanmar army’s presence on the border is raising fears about Rohingya infiltration into Bangladesh, according to the Bangkok Post. Rakhine State, a region of Myanmar bordering Bangladesh and India, has been witnessing turmoil for many days.

In addition to battling the Arakan Army in Rakhine, the Myanmar army has undertaken a significant military offensive against insurgent groups in the states of Kyah, Kain, and China. Over 4,000 Rohingyas have lived along the Tambru boundary line in Naikshatchari for the past few years, where the violence is taking place. Since August 2017, the Myanmar Army has begun flying jets and helicopters around the Bangladesh border. In Bangladesh, bullets and mortar rounds have been fired.

Unlike the two shells launched on September 3 at Tambru, which exploded over 120 metres within Bangladeshi territory, the two rounds fired today landed half a kilometre inside the boundary but did not do any damage. Myanmar, a military-ruled country, has targeted.