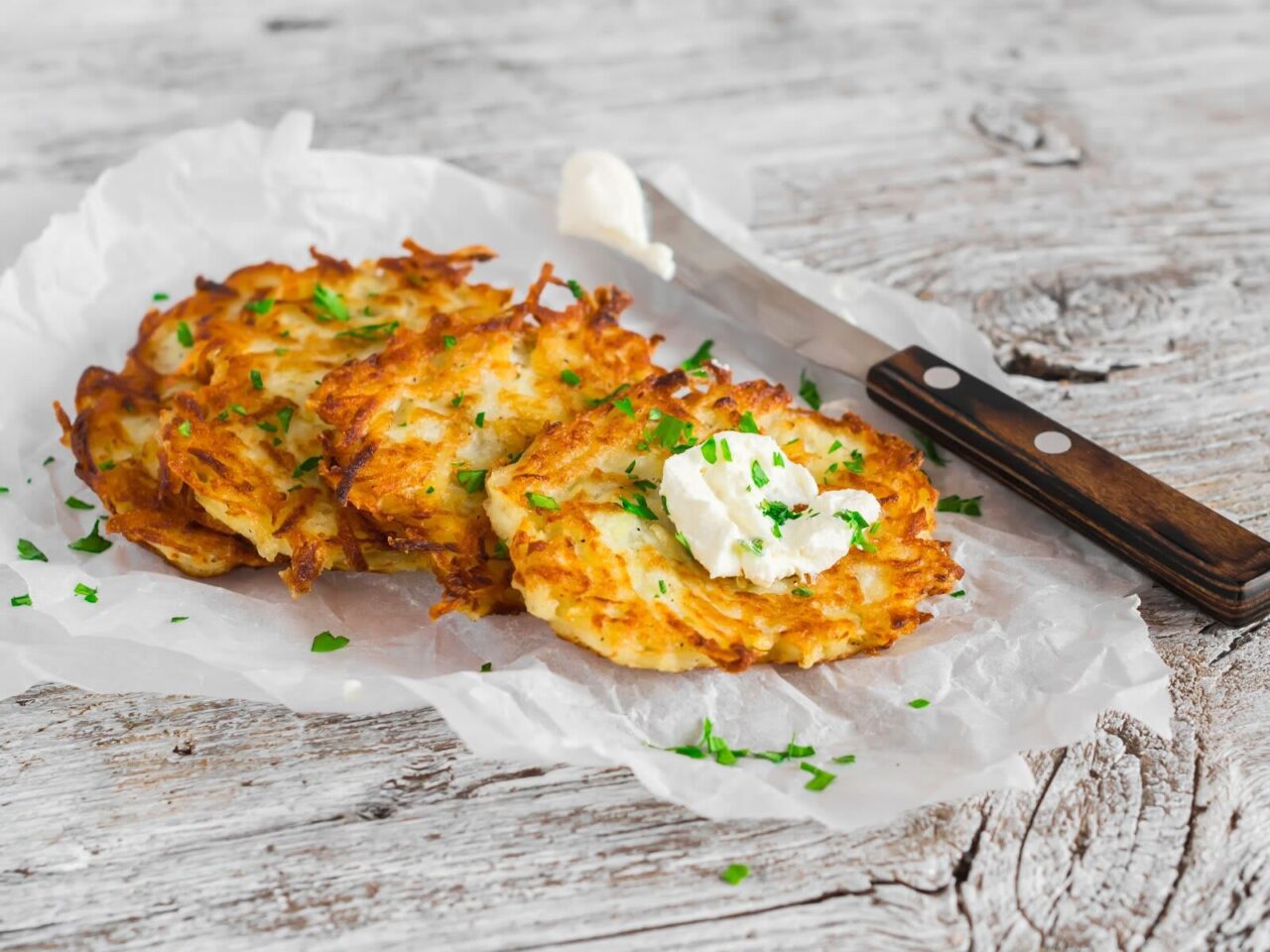 WHAT’S FOR HANUKKAH FRIENDS?
My personal favorites during the precious and symbolic holiday.
Flavors and Knowledge

Hanukkah is one of the few Jewish holidays not mentioned in the Bible. The story of its inception is available in the books 1 and 2 Maccabees; however, it is not part of the Jewish canon of the Hebrew Bible. These books tell the story of the Maccabees, a small band of Jewish fighters who liberated the Land of Israel from the Syrian Greeks who occupied it. Under the reign of Antiochus IV Epiphanes, the Syrian Greeks sought to impose their Hellenistic culture, which many Jews found attractive. By 167 B.C.E, Antiochus intensified his campaign by defiling the Temple in Jerusalem and banning Jewish practice. The Maccabees — led by the five sons of the priest Mattathias, primarily Judah — waged a three-year campaign that culminated in the cleaning and rededication of the Temple. {Via My Jewish Learning} Read the full article.

Since the eighties, my restaurants in Rhode Island have always celebrated the most important Jewish Holidays. Hannukah represented the simplest of them all to prepare, and execute the delicacies religiously offered on my menus. It had to do with the fact that while growing up in Italy, I witnessed and ate many Jewish foods but Italian in the soul. Years later, while living here in the States, I discovered that I have Jewish blood on one family side. Who knew?. As an old adage states “the difference between an Italian and a Jew is in the shiness of the shoe”.

The food relation between Jews and Gentiles runs through centuries of religious and social intricacies that developed into an indissoluble bond. I will cover the topic in another article.

So, let’s look into some dishes you must consider having during this precious and symbolic holiday, one that reinstates the values of family, religion, and family.

1) Latkes. Very festive potato-based pancakes. To prepare them, you need to grate the potato and mix it with onions or scallions, eggs, breadcrumbs, salt, pepper, and a small addition of baking powder. Fry the batter in olive oil, and serve hot, crunchy, and topping of choice.

2) Brisket. Beef brisket is an American favorite. Cook the meat in a large, deep, and wide pan, with olive oil, plenty of sliced onions, celery, and carrots. Once the vegetables turn slightly softer, add a sauce of tomato, red wine, red vinegar, and a dash of sugar. When you reach the end of the cooking process, pour in some Worcestershire sauce, paprika. Serve lukewarm and sliced across the grains.

3) Matzoh ball soup. An inviting soup made with tasty Matzo dumplings. One of the most appreciated versions involves using a full-bodied chicken and vegetable broth to simmer large meatballs modeled with soft Matzoh bread, onions, and various spices. Depending on your taste, you can incorporate more vegetables and adjust the taste with spices.

4) Kugel. Use noodles, potatoes, onions, flour, butter, egg yolks, and egg whites whipped until stiff for a stunning kugel. Adjust the seasoning, mix well and bake in the oven. You can enrich the dish with your creativity by adding rice flour, cooked rice, quinoa, poached cauliflower, seeds, sesame, and cumin as the spice. Again, recipes vary from family traditions and personal taste preferences.

5) Challah. A genuinely festive recipe, which can also represent an evocative centerpiece, from which to nibble during dinners. It is a soft bread (the recipe is similar to brioche bread, made with flour, olive oil, eggs, water, salt, sugar, honey, yeast) to be shaped according to the occasion. For Hanukkah, the ideal form must refer to the candlestick.

6) Rugelach. They look like small stuffed croissants, but the pastry used includes sour cream (or at least a cream cheese) among the ingredients. Mix the ingredients with flour, eggs, milk, sugar, butter. Once you have obtained the dough, leave to rest for about 3 hours, and continue by stuffing the inside with raspberry compote and chopped almonds. Roll up the dough, shape, and bake in the oven after brushing the surface with egg and milk.

7) Hanukkah Gelt. Together with gifts, they make all children very happy. They are chocolate pennies that often depict the Menorah; they are given to the little ones every evening of the celebration, perhaps in conjunction with the lighting of candles. The universal symbol of prosperity.

8) Sufganiyot. When boiling, the olive oil welcomes these sweet rolls of dough created by mixing flour, eggs, yeast, water, peanut oil. They resemble the typical American donut in reduced size. However, they are genuinely addicting when stuffed with fruit jams and garnished with a generous dusting of powder sugar. 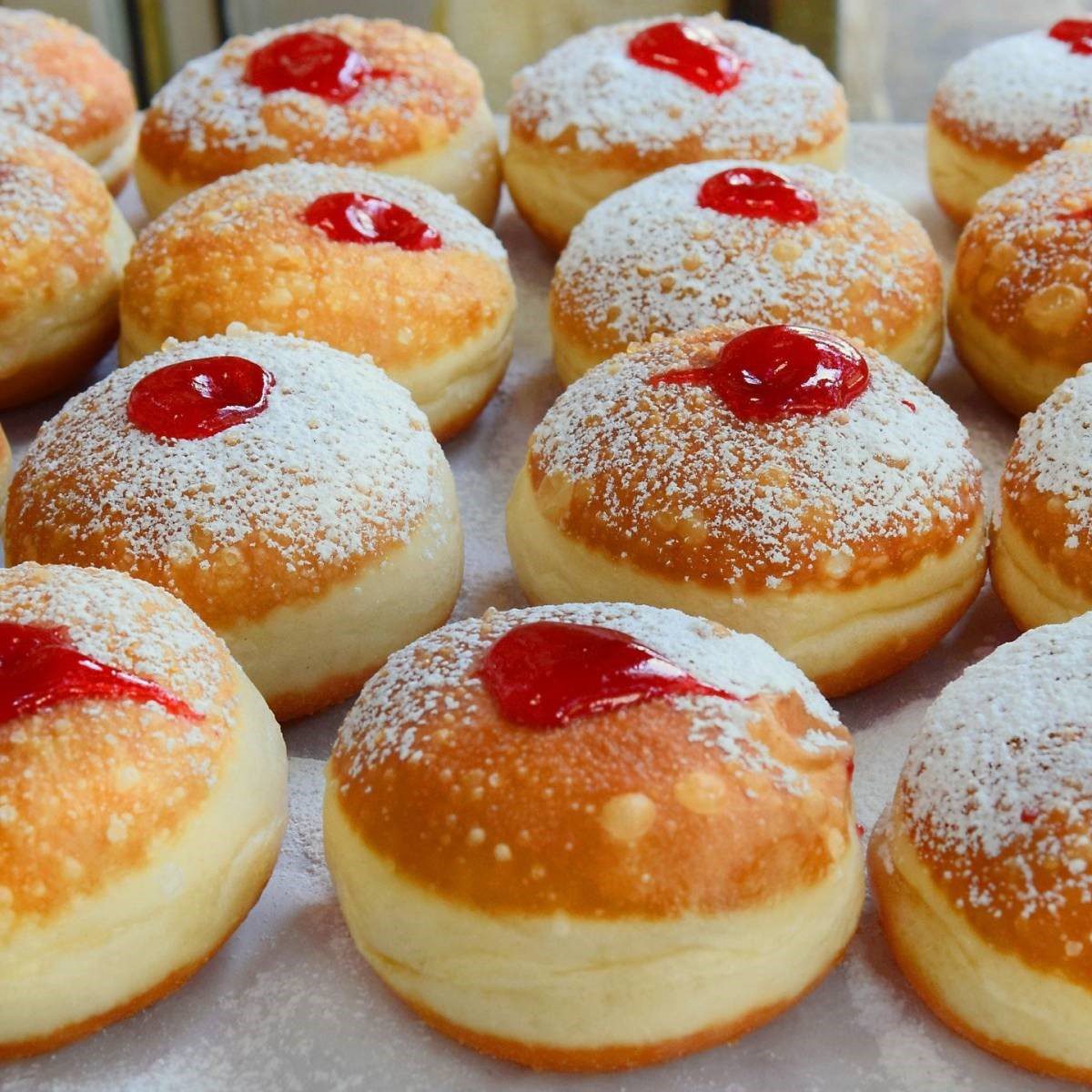